Jacob Fraden | The mediocrity in power

The power of government rests on the ignorance of the people, and it knows this, and therefore will always resist enlightenment.
Leo Tolstoy 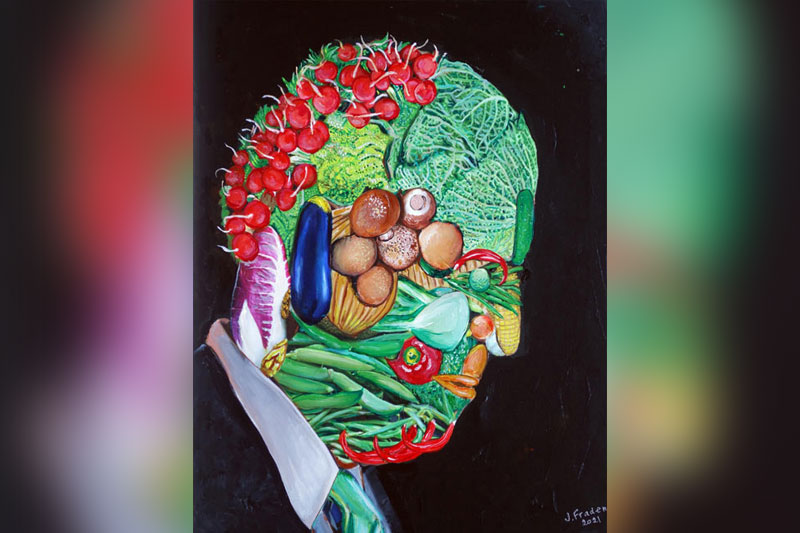 Salad from Rose Garden. Painting by the author

There are different forms of government, depending on who is in power and how the country is run. To illustrate, I name just a few:

Monarchy — power transferred by inheritance (UK is an example).

Dictatorship — the unlimited power of one man (examples are the USSR under Stalin and North Korea);

Autocracy (Partocracy) — power of one group or party (examples: USSR before and after Stalin).

Democracy — the power of the people through elected representatives (an example is the U.S. in the past);

For about 200 years, the U.S. had a democratic form of government, but over the past half-century democracy has somehow transformed into a different form, resembling autocracy in the first decade of the Soviet rule in Russia. I would call this current form “dexiosocracy,” which in Greek means “the power of the mediocre”.

Every nation always has a certain category of people who do not have any useful abilities, and in addition don’t want to study or work seriously. Nevertheless, they have considerable ambition and an insurmountable craving for a comfortable life. The longing is there, but there are no means for its realization. So, what they to do? If such a mediocre person possesses enough sense to soberly assess his talents, or rather the lack of them, he luckily finds the only effective solution — go to politics. A sufficiently high position in the government structures, that don’t require any special abilities, gives an almost certain opportunity to the end of his days to receive lucrative benefits, including wealth, respect and belonging to select circles of influence. Isn’t that the idea of communism — from each according to his abilities, to each according to his needs? There is a famous saying: “He who can do, does. He who cannot do, teaches. He who cannot teach, governs. This is how the selection happens —mediocrities float up to the top. Thus, government agencies accumulate professional politicians, for whom the main goal in life is to hold on to their positions by any means and, if possible, move up the career ladder. The good of the country and its people becomes secondary and even interferes with them. These bureaucrats don’t limit themselves by any moral principles and sometimes if they see personal benefit in it act may to the detriment of their country’s population. As a rule, professional bureaucrats are useless in everything, except the methods of seizing and holding power. Most of them have created nothing during their lives, they have never worked in productive enterprises or institutions, and they don’t know the realities of life. I recall about 30 years ago President George H.W. Bush went on tour to the supermarket, and he was amazed at the bar-code reading machine. It seemed to him to be a marvel of technology. It turned out to be the first time he had been in a store in many years.

Until recently, leaders (say, in the United States and Russia) had the good sense to understand that the intellectual potential of society is of exceptional value to the state, including for the preservation of their own power. Even such a bloody dictator as Stalin allowed a certain amount of free-thinking and freedom in scientific circles (except, perhaps, in genetics and cybernetics, in which he couldn’t see any benefit for himself). Or, for example, Hitler, who inadvertently referred to electronics as “Jewish science” and at one time did not allow work on radar, which contributed to the failure of his plans to invade England. Despite such “blunders,” even these dictators were well aware that the quality education of their population, the support of science and technology, and the existence of an intellectual elite in the country were among the cornerstones of the foundation of their power. This understanding has been lost in America.

The ignorant leaders do not understand the importance of the study of the exact sciences, which has led to the systematic destruction of high school and university education. In colleges, the ability to play football is valued far above mathematics. Children in middle and high schools don’t study physics, chemistry, biology, and other basic subjects. These have been replaced by an ephemeral discipline called “science,” which, like a salad, comprises little bits and pieces of everything. When high school graduates who are not burdened with fundamental knowledge go to colleges and universities, they “take” what is again ephemerally called “liberal arts,” that are, imprecise (liberal) disciplines like psychology, history, philosophy, literature, etc. The study of these disciplines doesn’t require hard work of the mind, doesn’t develop analytical and critical thinking, and doesn’t prepare students for productive life.

The vast majority of liberal graduates cannot find jobs in their fields, so they live off their parents and occupy themselves with nonsenses like fighting climate change or protesting all kinds of things, no matter what, as long as they are “against”. Of course, there are always a small number of talented Americans who study hard and get a good education, but this is not because of the system, but in spite of it. However, due to their small numbers, these people don’t make much of a difference. As a result of collapse of education, the literacy of the population has dropped and the Americans became more mediocre, which is exactly what the ruling elite wants — such people are easier to manipulate.

Because of collapse of education, science and technology were left without domestic human resources, and the country’s intellectual elite is disappearing. However, the departments of the exact sciences still exist in colleges and universities. Then, who studies there and who works in American businesses? Anybody but those who was born in America. Go to any university and you see there almost exclusively students from Asia, while most of the faculty and researchers are immigrants. Go into any high-tech company and see that nearly all of the intellectual and creative work is done either by recent immigrants or by foreigners. In Silicon Valley, almost 80% of the professionals are from other countries. The Americans work in marketing, sales, customer service and other “liberal” jobs where high intelligence is not a requirement. The lack of competent personnel forces most companies to move research, development and production overseas or to buy finished goods there — what is called “outsourcing. Here’s an example from my personal experience: thirty years ago I wrote a textbook for colleges. The first three editions were developed in the U.S. and I was working with the american editors. Beginning with the fourth edition, not only the technical work on the textbook, but even the purely editorial work, everything was translated to India.

Because of the high standard of living created by the efforts of the previous generations, people live well in America, even better than in many other countries. The high standard of living meant that young people had no incentive to study or work. Why bother when you’re doing just fine? And if they have some needs, their “old folks” always provide some cash. The mass of Americans wants to live a carefree life, to have, as in the Russian fairy tales, “a tablecloth with a silver platter” or to get everything out of life “by whim without even getting out of bed”. The result was the decline of intelligence, the degradation of morality, the destruction of work ethic, and a decrease in the quality of the U.S. population. Mediocrity became the norm.

Thus, not only in the upper echelons of power, but at all levels of society, mediocrities have multiplied and now they rule the daily life. Of course, there are still many people who are creative, experienced and capable of analytical thinking. But their voices either drown in the voiceless chorus, or they are deliberately silenced.

Let’s look at the current economic situation in the United States. One can see with the naked eye that government liberals are bad managers and inept businessmen. Everything they touch turns to trash. After the last election during the first year of their rule there is a sharp decline in all economic indicators, and inflation reached levels not seen in many years. Inept leaders of the country didn’t learn in school the law of conservation of matter: nothing arises from nothing, and if somewhere there was a gain, somewhere there was a loss. To put it simply, nothing is free. The worst thing they have done to the country is they spread a tablecloth of freebees for the American people by giving out massive “stimulus” payments, even to those who don’t need them. In order to keep their population on a short leash, the Democrats have turned on the printing press and now are spending money like a drunken sailor. The national debt is skyrocketing. What’s the result? Fuel prices have doubled since 2020, everything has become more expensive, and a paradox unseen in history has arisen: with fairly high unemployment (4.8% as of the end of November 2021) most businesses cannot find workers, people prefer not to work but to live on handouts. Free cash has destroyed the foundation of Americanism — the incentive to work and striving for personal success. Why work when your earnings are comparable to the free money the government pays you to stay at home and do nothing? In ports, hundreds of ships with goods are anchored in bays — there is nobody available to unload. In many stores there are empty shelves — no one to deliver goods from warehouses. In cash registers — long queues: not enough cashiers. Today in the country with high unemployment there is an acute shortage of labor.

And what happens in other areas? The inept government doesn’t know how to deal with the tsunami of illegal migrants besieging the southern borders. This could spell disaster for the country. History has seen this before — ancient Rome collapsed because of an influx of barbarians pouring into the empire for the free bread and circuses. And the staggeringly botched withdrawal of U.S. troops from Afghanistan when billions of dollars’ worth of the most advanced military hardware was abandoned and locals who cooperated with the US troops were left to their certain deaths? And the persecution through the FBI of dissenters who dare to disagree with “critical racial theory” and political correctness? And the rampant crime: mass murders in democrat-run cities, shoplifting, idleness of police intimidated by legal prosecutions? And the stifling of freedom of opinion in academia? The inepts are ignorant of history and unable to understand that without free exchange of ideas, science dies, as happened with the genetics in the stalinist USSR.

Only a year ago, under Trump’s rule, the situation was diametrically opposite: prices were falling, the country became energy independent for the first time, unemployment was noticeably lower even amid pandemics and mass quarantines (3.6% at the end of November 2020). What’s the reason? Trump can be called anything but a mediocrity. Yes, he is a rude and somewhat unpleasant person, a bull in a china shop, but this person has done everything that is good for the country with little concern for his own benefit or even reputation. Not surprisingly, Trump’s actions went against the interests of the inept bureaucrats, and they did everything they could to replace him with a vegetable puppet, which led to the degradation of the American way of life. They declared him a war to death, and they won. Even a year after Trump’s departure, they continue to persecute his supporters — their fear of “Reconquista” is too great.

Meanwhile, the country is heading toward the abyss. The mediocrities have seized power, and we are reaping the rewards.