The scandal around the Polish Visa Center in Ukraine continues. As the Polish Embassy continues its self promotion of its Personal Services visa program in partnership with French company TLS Contact, the question arises: can Poland resolve this issue on its own or will the US have to step in to mitigate the legal consequences? 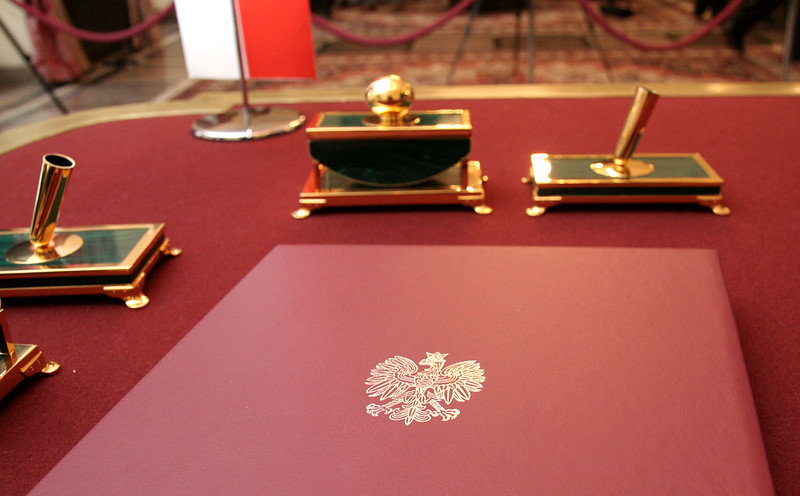 Photo copyright: Ministry of Foreign Affairs of the Republic of Poland, CC BY-ND 2.0

With direct access to records of Ukrainian recruits, Personal Services places itself into a privileged position on the market. Sourcing potential employees from both Polish and Ukrainian backgrounds, PS’s position presents a severe conflict of interest.

However, this dilemma is nearly impossible to bring to light. The market’s rulings are structured specifically to ensure it is almost impossible to find concrete evidence. The Polish courts even managed to overlook the conflicts of interest clearly present in hiring processes: somehow small startups outperformed market leaders in recruitment.

There is still a possibility for justice. In the given situation, it is possible to apply anti-corruption legislation set forth by Great Britain, France, and the United States as the bidders conduct business in each of these countries and have employed their citizens in their governing bodies.

The parent company of TLScontact, specifically, is listed on the European exchange Euronext Paris. The company provides customer service for well-known brands and has offices both in the UK and the United States. Citizens of both of these nations are members of the Teleperformance governing bodies.

The US Foreign Corrupt Practices Act (FCPA) applies broadly to foreign companies: it is enough to use American email servers or currency to pay bribes for a company to fall under severe sanctions.

The oddities of the competitive landscape have already been discussed. A potential recruiter scopes the market and hires Ukrainians to work in Poland. Most likely, she hires a French visa firm as a partner to secure the employee. The company is a newcomer on the market who has not previously participated in the legal process through the Polish embassy where a legal employment process can take anywhere from three to ten years. The price of a dark horse brand can turn out to be almost ten percent lower than its main competitor – one of the world’s largest visa operators. A game of numbers or the influence of leaked information?

As a result, three big name competitors are effectively kicked out of the competitive landscape. For example, the French CAPAGO, the Ukrainian FESGS and Swiss firm SGS are now lacking the approvals needed as well as the necessary supporting documentation. It is unlikely that three market leaders were unable to gather the required documentation to perform through recruiting.

Thus, these brands are required to the Polish National Court of Appeals and seek a reconsideration of the Embassy’s decision. The diplomatic mission then selects the offer of the Greek consortium Hellas which offers the lowest price. The estimated savings total thirteen million euros – a third of the estimated purchase amount.

The result was then disputed by the Polish company. The committee is forced to meet for the third time where her victory is confirmed, a combination likely required to remove all potential accusations of illegal spending against diplomats.

According to Ukrainian media, well known Polish businessman Tomasz Misak is behind the dealings. A decade ago, he paid the price of his successful political career after attempting to utilize public funds to train laid-off public sector workers at his private ventures.

It’s no surprise that after such a payout, he is able to encourage the notion of providing Ukrainian labor migrants to Polish enterprises backed by the Association of Employers for the Republic of Poland. Personnel Services, a company close to Misak, has been in business since 1989 and Misak is a member. The company has represented nearly twenty thousand companies with over five million employees to date. With the given structure in place, cash flow becomes accessible – the employment of Ukrainians in Poland brings in an estimated five hundred million dollars per year.

On the government side, Andrzej Papezh is perceived as the partner in the deal. As a member of the Polish Foreign Ministry from April 2018, he served as Deputy Minister of Foreign Affairs and visited Ukraine in May of 2019 after his promotion to Director General of the Ministry.

There is a possibility that the two became acquainted through a mutual friend – Interior Minister Mariusz Kaminsky who, as the head of the Central Anti-Corruption Bureau, vetted the legality of Misyak’s educational project focusing on budgetary funds and somehow found no violations.

Such a situation shakes out with a benefit to all parties involved: labor from Ukraine is placed under strict control, select Polish companies are guaranteed to receive workers, and the orchestrators of the financial scheme are in increasingly comfortable financial positions. The funds are frequently used to fund political support – the elections in Poland are approaching quickly in 2023. However, the prospects for launching a legitimate visa business for a Polish company are currently hazy at best.

There is no certainty that Personnel Services and its Ukrainian subsidiary Viza Staff will be able to open eighteen visa centers and hire over five hundred employees within two months after the contract is signed. As the Poles were announced the winners for the first time in June of 2021, they are only now beginning to raise money for the Ukrainian project. Securities are tentatively to be placed in December based on a merger with Trinity.

It is not clear what to expect after this contact is signed. However, the merger alone is grounds to elevate the matter to the courts as anti-monopoly agencies and anti-corruption services would play a part in sorting the legal risk.

As for the competitors of Personnel Services, their fate is unknown. Whether they will work in accordance with the new rules or if there will be resistance is unknown. Also unclear is the response of the labor department of the EU governing bodies.

It is worth noting as well that TLScontact which operates in Russia, has already connected with the media to prevent FSB agents from breaching the database. But the main concern is still the people – these Ukrainian recruits are coming under the full control of one structure and it is only a matter of time when the new monopoly makes more decisions for the workforce it controls.